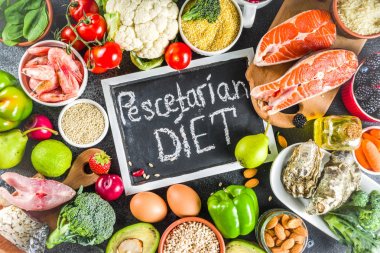 Pescatarian is a vegetarian who only consumes fish and other kinds of seafood. This includes fish such as tuna (canned), mackerel (fresh or frozen), salmon, sardines, anchovies, herring, shrimp, trout, scallops, lobster, crab, groundfish (such as cod, haddock, monkfish, pollock), etc.

A person who eats primarily plant-based foods and consumes seafood might also be considered a pescetarian.

The reasons people may choose to become a pescatarian vary, but some believe they can eat all the fish their body needs rather than land-animal products such as meat, chicken, or eggs.

Others might be concerned about the high mercury content in fish; others still may feel that it’s important for ethical reasons to avoid eating all animal products such as meat or eggs but still need animal protein due to different nutritional requirements.

6 Health Benefits of Becoming a Pescatarian

This is one of the major reasons why many pescatarians include fish and other seafood to their plant-based diet. Many studies have indicated pescatarians have healthier hearts. The studies showed that higher consumption of fish, and omega-3 fatty acids is linked with a lower risk of heart disease.

Pescatarians also have lower levels of bad cholesterol (LDL), and triglycerides compared to people who eat meat, and their diet is rich in nutrients, full of proteins and have a lot of omega-3s which may benefit the heart.

In general, pescatarians tend to live longer than the average person. There is some evidence that fish consumption can help protect against cardiovascular disease and certain forms of cancer. Possible mechanisms include increasing HDL (“good”) cholesterol in the blood and decreasing inflammation in arteries. Fish consumption also appears to be associated with a decreased risk for metabolic syndrome, diabetes, and stroke. 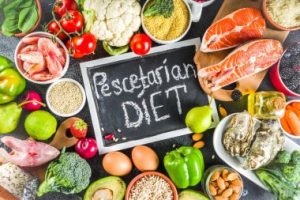 A study published in 2013 showed that eating fish reduced the risk of type 2 diabetes by 45%. People with Type 2 diabetes have been found to benefit from pescatarian diets, as weight loss is frequently the most efficient approach to treat the condition.

A diet like a pescatarian low in salt can decrease blood pressure, heart rate, and other markers of stress. Studies have shown that eating fish for a prolonged period of time provides the human body with omega 3 fatty acid intake which is intrinsic to reduce blood pressure.

The high protein content of beef, fish, and poultry, as well as the range of useful nutrients they contain in generous amounts, make them one of the best sources of protein. In addition to giving you a much-needed energy boost, these diets can also help protect you against certain illnesses. There are so many benefits that come with becoming a pescatarian, although, it has its own drawbacks or disadvantages, that’s not what we want to focus on in this article. If you feel like you want to start enjoying the benefits, you can consider become one (a pescatarian), but make your own full research.