Home » Are There Any Health Benefits of Baked Beans? 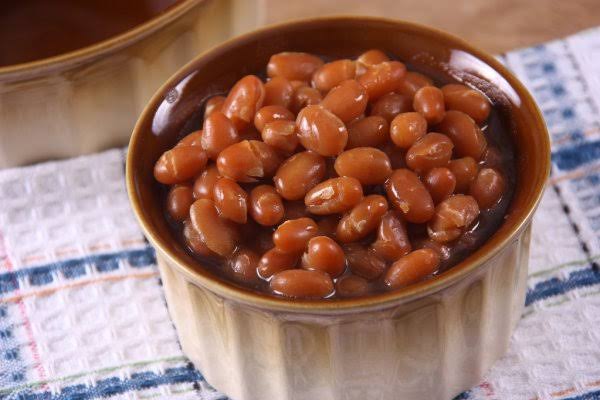 Baked beans are legumes covered in sauces, prepared from scratch or sold premade in cans. They contain small, white navy beans. They have been a popular side dish for many meals, and on salads. Medically, legumes are considered healthy, but this article will be telling you if there are any health benefits of baked beans. By so doing, you will know whether baked beans are good for you or otherwise.

Before going into further details, let’s look at the ingredient of baked beans. They commonly include sugar, herbs, and spices. Sometimes, the recipes may consist of tomato sauce, vinegar, molasses, and mustard.

Some baked beans are meant to be taken by vegetarians, while others that contain small amounts of bacon or salt-cured pork for flavor are meant for others. Although they are referred to as baked beans, the beans aren’t always baked.

Dieticians have proved that baked beans provide many nutrients. The amount of nutrients, however, varies by brand. For instance, a 1/2-cup (130-gram) serving of canned baked beans offers you: 119 calories, 0.5 grams of fat, and 27 grams of carbs. Others nutrients in baked beans include: Fiber, Protein, Sodium, Potassium, Iron,  Magnesium,  Zinc, Copper, Selenium, Thiamine (vitamin B1), and Vitamin B6. However, unlike other legumes, baked beans have very amount of phytate. This is because cooking and canning reduces the phytate content of baked beans.

With baked beans, you will have beneficial plant compounds, including polyphenols, that will protect your cells from damage caused by unstable molecules called free radicals and inhibit inflammation.

See also  Healthy Eating Tips For Getting A Fit Figure

According to some medical studies, here are some likely health benefits of baked beans:

Apart from their fiber features, baked beans contain the plant compounds apigenin and daidzein and other nutrients that may protect against colon cancer.

Part of the fibre compound provided by baked beans is called phytosterols that can inhibit cholesterol absorption in your gut. With such, you may witness reduced high blood cholesterol, a risk factor for heart disease. 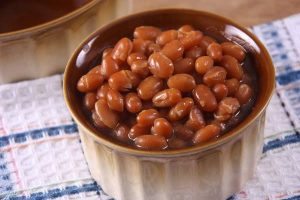 Having highlighted the health benefits of baked beans, they also have some disadvantages. These can be minimized by making them from scratch. They include:

Baked beans usually contain one or more sweeteners, such as sugar or maple syrup. For instance, a 1/2-cup (130-gram) serving of baked beans, canned or homemade, contains an average of 3 teaspoons (12 grams) of added sugars, which amounts to 20% of the daily limit for a 2,000-calorie diet.

This can cause tooth decay, obesity, heart disease, type 2 diabetes, and memory problems.

The interior lining of baked beana cans commonly contains the chemical bisphenol A (BPA), which can leach into foods. BPA has been associated with many health concerns such as increasing obesity and reducing fertility.

Some are very salty

People have expressed concern over sodium, which is part of the baked beans’ nutrient. The complaints are mainly from those prone to high blood pressure with increased salt intake. There is an average of 19% of the RDI for sodium per 1/2-cup (130-gram) serving in canned baked beans, which is primarily from added salt.

But when making yourself, you can add less salt. This is possible if you’re making baked beans using canned rather than dried beans. Rinse and drain them to reduce the sodium by about 40%.

Most canned baked beans contain additives, which include:

The listed additive can lead to obesity, reduce fertility, cancer, among other potential health concerns.

So, are there any health benefits of baked beans? Yes, there are. It may improve gut health and possibly help in lowering cholesterol. However, there are also some drawbacks about baked beans, such as  it being high in added sugars and salt, containing food additives, and BPA contaminants from can linings.