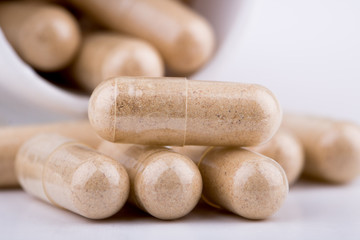 If you’re looking for some natural supplements that improve your mental performance, you have probably heard about the term of nootropics. By definition, a nootropic is a substance that has the ability to improve mental performance such as memory, intelligence, motivation, attention, and concentration.

There are thousands of natural supplements out there that can act as a nootropic and nourish the brain. Amino acids, minerals, vitamins, herbs, antioxidants, phytonutrients, essential fatty acids all act as nootropics.

Being that as it may, every situation and every person is different, certain nootropics may work well for others, but they won’t have the same effect on you. However, I’ve handpicked these 12 nootropics that are most commonly used Fish oil supplements are an abundant source of 2 essential fatty acids, docosahexanoic acid (DHA) and eicosapentaenoic acid (EPA) both of which are linked with many health benefits including improved brain function.

These fatty acids come under the category of omega-3 fatty acids in which DHA plays a major role in contributing to the structure and function of the brain. On the other hand, EPA has anti-inflammatory effects that protect the brain against damage and aging.

According to a study, DHA plays a major role in improving thinking skills, memory and reaction time as compared to people who weren’t on it.

Another study concluded that EPA is capable of improving brain function. Moreover, in the same study researchers found out that EPA also helps in getting rid of the symptoms of depression.

READ  Group Therapy: An Essential Need for People who are Lonely

More research suggests that taking fish oil that contains both of these fatty acids slows down or reduces the decline in brain function as we age. Regardless of the benefits mentioned, it’s always best to consult with your physician before taking in any supplements.

Resveratrol by nature is an antioxidant, and it can found in the skin of grapes, raspberries, and blueberries. Traces of it can also be found in wine, chocolate, and peanuts.
Several studies have suggested that resveratrol supplements can improve memory by preventing the degradation of the hippocampus, an important part of the brain.
Additionally, animal studies have shown that resveratrol can improve memory and brain function.

It is also believed that resveratrol has the ability to slow the degradation process of the brain as we age which makes it a healthy natural nootropic supplement.

This over here is a no-brainer, caffeine is a natural energizer found in coffee, tea, and dark chocolate. There are plenty of supplements available in the market, but there isn’t any need for spending money on them because caffeine is abundant in the sources mentioned above.
Just like any other nootropic supplement, caffeine stimulates the brain and central nervous system thus increasing our productivity and creativity.
This study, in particular, proves that caffeine has a positive effect on boosting memory and efficiency of the brain. Moreover, subjects also had better reaction times and a marked efficiency in brain function.
Each cup of coffee contains 50-400 mg of caffeine. Generally, 200-400mg of caffeine per day is sufficient for most. However, consuming more caffeine then that has proven to have side effects such as anxiety, nausea and possibly difficulty in falling asleep.

Acetyl-L-Carnitine is an amino acid (a building block of proteins) that is naturally produced in the body. This amino acid has a major role in producing energy for your body.
A study conducted in 2012 regarding Carnitine derivatives concluded that these supplements help improve memory, alertness and slow down age-related memory loss. Furthermore, ALC is also used for mental disorders such as Alzheimer’s, depression, problems related to alcohol, Down syndrome, cataracts, nerve pain, and diabetes.

An herbal supplement derived from the Ginkgo Biloba tree. Many people use this remarkable supplement to boost their brain power.
One study indicates that ginkgo biloba has the ability to increase blood flow to the brain which in turn improves functions such as focus and memory. Being said that, some studies also suggest that its effects are mixed; one study found that ginkgo biloba reduces age-related decline in brain function.

Creatine, a natural substance found in our body that plays a vital role in energy production. It’s naturally present in our muscles, and a small percentage is in the brain.
Creatine is a popular supplement, but it can also be found in many foods such as meat, fish, and eggs.

One study concluded that vegetarians who were taking creatine supplements noticed a 25-50% improvement in memory and intelligence.

Meat eaters, on the other hand, won’t feel these effects because they get enough creatine from natural sources.

Studies have also shown that taking 100 mg of phosphatidyleserine three times a day could reduce age-related decline function of the brain.

Furthermore, studies also suggest that people who take up to 400 mg per day of phosphatidylserine have shown improved thinking skills and memory.

It is a medicine derived from the herb called Bacopa monnieri. This herb is most commonly used in traditional medicine and is known to improve brain function.
Many studies indicate that it is linked to improving thinking skills, memory, both in elderly and young individuals. Studies have also indicated that Bacopa Monnieri cures age-related decline in brain function.
The recommended dosage of Bacopa monnieri is 300mg per day. However, it may take around 4-6 weeks for you to notice any results.

Rhodiola Rosea is a famous nootropic supplement that is used in Chinese medicine to improve general health and boost brain function. It is derived from an herb called Rhodiola Rosea.

Rhodiola Rosea works differently as compared to other nootropic supplements; it improves mental function by getting rid of fatigue.

A study conducted in 2012 concluded that people who took Rhodiola Rosea experienced less fatigue and noticed a marked improvement in their thinking capability.

S-Adenosyl Methionine or in other words the SAMe is a chemical compound that is naturally produced by our bodies. SAMe is critical for chemical reactions that involve the production and break down of compounds such as fats, proteins, and hormones.

SAMe’s mode of action is different; it enhances the effects of some antidepressants and reduces the decline in brain function in people who have depression.
One study conducted regarding SAMe found out that subjects experienced enhanced anti-depressant drug effects that weren’t responding to the drug before.
Another study came to the conclusion that SAMe may act as an effective antidepressant as compared to commercially available antidepressants.

An edible mushroom that can be found in many food stores plus it’s also available in supplement form. Just like any mushroom, Lion’s mane is believed to have several health benefits.
According to a study, a group of subjects took 250 mg tablets of lion’s mane thrice a day and noticed a significant boost in their cognitive functioning.
Other studies indicate that Lion’s Mane can also help to reduce anxiety and depression.

You might’ve heard of this amino acid because it is present abundantly in turkey and humans. Most people believe that this amino acid makes them sleepy. However, the supplement of a form of tryptophan is taken by man to aid in getting rid of depression.

The mode of action of Tryptophan is pretty simple; it works by increasing the serotonin (The happy hormone) levels in your brain. When tryptophan is taking for this purpose, the recommended dosage is three to four times per day for a total of eight to 12 grams.

Moreover, a study indicates that tryptophan can boost memory.
Final Thoughts
Nootropics have been used for quite some time now; most nootropics have shown promising results in boosting mood, memory, reduction in depression and improving the overall health of our brain.
Be that as it may, it’s always a good idea to check with your physician before taking any supplement. Furthermore, nootropics are only effective who have a mental condition or lack the proper nutrition.