Home » The Health Benefits Of Burukutu 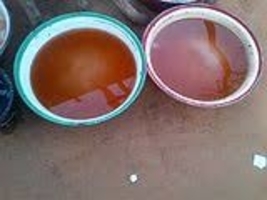 Burukutu is a popular alcoholic beverage and drink. It is widely brewed and consumed in Africa. Burutuku drink is known by different names in different parts of Africa. It is called “tchoukoutou” in Benin and Togo, “ikigage” in Rwanda, and “dolo” in Burkina Faso. It is also called “Amgba” in Cameroon, “kaffir” in South Africa and “pito” and “burukutu” in Nigeria and Ghana. It is indeed an African drink. Well, today you will learn about the health benefits of burukutu, the nutritional value of burukutu and other helpful information about this magnificent African beverage.

However, before we go into details let us learn briefly about burukutu.

Burukutu is brewed from the grains of guinea corn (Sorghum bicolor), millet (Pennisetum glaucum) and maize (Zea Mays). How is burukutu prepared? Burukutu production is done in five simple steps.
The first step is malting. Malting converts the cereal into malt by soaking it in water and then halting germination (by blowing hot, dry air). This is done to develop enzymes that can break down starches and proteins in the grain. The next process is called steeping. Here, the malt is soaked in water for at least three days to let it absorb moisture.

After absorbing moisture, it is left to air-dry for some days. Then the next step called mashing follows. Here, it is mixed with water and heated to a soft pulpy state. Finally, the drink is fermented. Fermentation of burukutu takes at least two days using the sugar fungi form of yeast.

See also  Nutrition Tips: What You Should Eat While On Vacation

The micro and macronutrients of burukutu drink were determined by Augustine China Ogbonna and Christian Izuchukwu Abuajah in an experiment conducted in 2015.

In accordance with the recommended Dietary Reference Intake’s (DRI) acceptable macronutrient distribution, burukutu drink has a normal range of crude protein for the body, a low amount of fat. It is also low in Carbohydrates. They have a small amount of dietary fiber and are generally low in vitamins and minerals. However, they consist of beta-carotene, ascorbic acid, and retinol. They also have higher potassium than sodium levels.

The health benefits of burukutu drink have not been extensively studied and researched. However, based on the study and nutritional values of burukutu stated above, we can determine a few health effects of burukutu beverage.

1. It can prevent the onset of chronic degenerative diseases

It has been said that burukutu can prevent the onset of some chronic degenerative diseases like hypertension. The higher potassium than sodium levels makes them a perfect diuretic, diet for the prevention of the onset of certain health conditions including hypertension.

See also  7 Health Benefits Of Nigerian Plum You Must Know

Protein plays an essential role in a healthy diet and nutrition. Since the beverage contains a recommended amount of protein it is a healthy beverage.

3. They contain some essential vitamins

More research definitely has to be done to gain more knowledge on burukutu. However, we know it is a healthy Nigerian beverage.