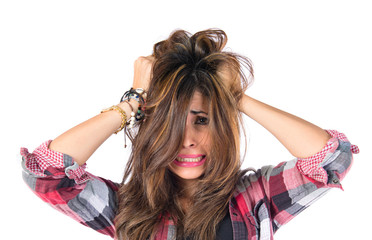 Trichotillomania is a body-focused repetitive behavior disorder which causes the sufferer to pull their hair out compulsively. It is referred to as hair pulling disorder. There is a disturbing lack of awareness about Trichotillomania, given that it is estimated that about 1 in 25 people experience it.

This disorder can be debilitating to the sufferer as it causes them embarrassment and can lead to teasing and victimization. They can have large bald patches on their scalps with painful-looking wounds from where the roots of the hair were pulled out. In extreme cases, so much damage is done to the hair follicle that the baldness becomes permanent. It is possible that a genetic predisposition to Trichotillomania can exist as research indicates that a number of those who experience it have a relative who also has it. It is therefore advised that parents be vigilant for signs of the onset of in their children if there is a family history of the condition.

For parents who adopt children, agencies try to get a full family medical history from the birth parents, although this is not always possible.

Most Trichotillomania sufferers will explain that hair-pulling is a way to relieve stress and anxiety which is why they tend to exhibit more extreme symptoms during times of strain such as during exams, the death of a loved one or relationship troubles.

Similarly, many patients report tension in the home as a cause of more frequent, extreme hair-pulling episodes. Parents and other responsible adults should not discount environmental factors as contributors to worsening a child’s trichotillomania as they can have a direct link to it.

There have been cases where Trichotillomania was interpreted as a child’s response to abuse. That is not to say that if a child has Trichotillomania, he or she is being abused. However, it should be ruled out during the diagnosis phase.

ALSO READ: What are the Types, Causes and Symptoms of Hair Loss?

Many Trichotillomania sufferers report having experienced extreme, prolonged itching of the scalp, eyelashes, and eyebrows before their first hair-pulling experience. They describe the hair-pulling as relieving the itchy feeling.

Such sensory events can bring on the onset of the condition and the relief obtained from hair-pulling becomes a compulsion. The feeling of relief becomes a positive reinforcement for the person. Other sufferers report an actual feeling of pleasure derived from hair-pulling, and an inability to prevent themselves from indulging in it.

Researchers believe that there may be a link between Trichotillomania and reduced or incorrect levels of certain brain chemicals such as serotonin and dopamine. These are the same chemical triggers for clinical depression, which is why in some instances, treating the sufferer will anti-depressants will help drastically.

See also  Warnings Signs Of Dementia You Should Know

However, this does not hold true for all cases. Because Trichotillomania can have its roots in many factors, treating only one may alleviate some of the behavior, but it cannot eliminate it altogether.

People who struggle with mental illnesses such as depression, anxiety, post-traumatic stress disorder (PTSD), eating disorders and obsessive-compulsive disorder (OCD) may develop Trichotillomania as a coping mechanism due to the relief it provides.

Sufferers of such disorders report being in extreme emotional turmoil and pain which can often be relieved by means of acts of hair-pulling or self-mutilation (cutting). In such cases, where the underlying issue can be successfully treated, there is a chance that the symptoms of Trichotillomania can be alleviated somewhat.

SEE ALSO: 5 Things You Must Know While Considering Hair Transplant In 2018

In women, Trichotillomania can be linked to their hormone levels which change as their menstrual cycle progresses. Some women may exhibit no symptoms at certain times in their cycle, but as the levels of estrogen and other hormones change in the lead up to menstruation, symptoms become apparent again.

This is not to say that hormones cause Trichotillomania as such, but rather that they can cause it to flare up with more extreme episodes.

The anatomy of the brain

The brain is divided into segments that control various aspects of the body’s functioning. Neural pathways allow the brain to communicate with the rest of the body.

Where there is an abnormality in these pathways that affect the parts of the brain regulating emotions, the formation of habits and impulse control, Trichotillomania may result. In such cases, the sufferer is inclined to pull their hair out without even being aware of it.